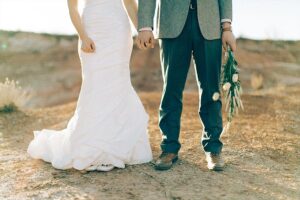 When someone dies, their estate enters into the process of “probate.” If there’s a will, this can sometimes be resolved quickly; an executor will make sure that debts and assets are taken care of. But if there isn’t a will, the assets of the estate will be distributed based on the laws of inheritance. And when it comes to common law marriage, that can be a problem.

The Issues with Common Law Marriage in Arizona

Some partners who have been together for a long time but haven’t become officially “married” rely on common law marriage. Common law marriage laws will acknowledge two partners as married if they have been acting as a married couple for long enough.

However, this is state by state. Arizona doesn’t have common law marriage laws. So, even if you’re cohabitating with someone for a long time, sharing finances, and even holding yourself out as spouses, you may not actually be spouses in the eyes of the law.

If your spouse dies and their estate goes into probate, you won’t be considered a spouse in terms of inheritance. The inheritance will go to a child, parent, or grandparent; to the law, you’ll have no inheritance.

If you were married through common law in another state, Arizona will still recognize that marriage. It has to be a legal marriage in the state that you’re coming from.

Otherwise, it’s in your best interest to either get married or have a written will.

How to Address the Problems With Common Law Marriage

Because Arizona doesn’t acknowledge common law marriages, official marriage is critical if you want your spouse to have the legal rights of a spouse. If you do not want to get married (which can occur for a variety of reasons), you need to draw out a will.

An estate lawyer can help.

Issues of legal inheritance only come up when there isn’t a valid will. A valid will always overrides this. In a will, you can give anything to anyone, even if they aren’t your spouse, parent, grandparent, or child.

Another workaround is through stated beneficiaries. Some people are leaving fairly little behind in terms of their assets, but they have life insurance. You can name your partner as your beneficiary even if they aren’t your spouse.

One way or another, it’s very important to plan ahead. Many people either don’t create a will or they don’t update their will. This can leave their family scrambling should the worst occur.

Do you have questions about probate, common law, estates, or inheritance? Contact the Dana Law Group today to find out more.